News and Events
send us a message

A Champion On and Off The Mat

Meadow Christensen placed first in the invitation only Five Grappling National Championship and second this past spring in the Kid's Pan American Jiu-Jitsu Championships, the largest martial arts tournament in the world for kids.

Team Black Arrow was awarded the "Grand Championship Team Cup" and awarded the "Most Technical Cup" for the most Gold Medals at the Minnesota Grappling Challenge hosted in Minneapolis on April 25, 2015.

The 38-year-old Lind submitted his first opponent with a snare choke and outpointed his other opponents to secure the gold. This is Lind's first international level jiu-jitsu tournament and his first Pan American Championship title.

The Pan American Championship is the largest Jiu-Jitsu tournament in the world.

Matuszak triangle choked his first opponent in 3 minutes, 55 seconds. The Chicago Championship is the largest Jiu-Jitsu tournament in the Midwest. Matuszak is also a Submission Hunt champion and a Fargo Open champion.

Four of them qualified by making it to the podium at The Five Grappling Illinois in Chicago on Oct. 18th. They were Aidan Muller, first place; Meadow Christensen, first; Josh Brown, second; and Kyle Matuszak, third. All competed in Miami except for Josh Brown who is expecting the birth of a son.

Christensen is the second Minnesotan in the Kid division to earn such a prestigious award and is the first Kid Female in Minnesota to win a North American Jiu-Jitsu championship.

The Minnesota Grappling Challenge was held at the Minneapolis Convention Center May 3rd. 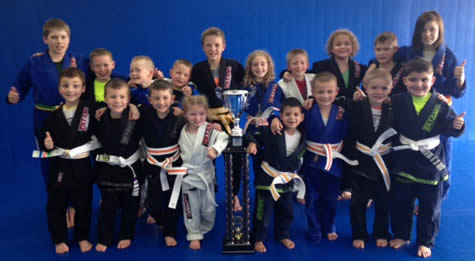 It was time to start over. At least that’s what Jared Feierabend thought. The 1995 Brainerd High School graduate didn’t like the direction the image of mixed martial arts was going in the lakes area so he wanted to do something positive to change it."

Enter Black Arrow Martial Arts, a new training facility on Washington Street across from Northwest Pizza and Boardwalk Bread and Bagel. With the closing of Brock Larson’s Warrior Alliance, and the recent bad publicity of another MMA group, Feierabend wanted to set a new standard.

Feierabend said his ultimate goal is to assist his students to reach their full potential, while encouraging them to achieve their individual goals. He said martial arts is a great way to improve self-confidence, discipline, coordination and to get in shape.

“Black Arrow specializes in developing complete martial artists through a professional, comprehensive martial arts system,” Feierabend said. “We offer training combining the technicality of jiujitsu, the explosiveness and timing of judo and the persistent mentality of mixed martial arts, all while holding true to the essential function of martial arts — self defense.”

Of all the tissue in the human body, Feierabend said he wants to work the brain of his students the most. He said with quick, proper thinking his students will be better prepared for whatever comes their way.

“When people come into our dojo it’s all about producing thinking and getting their frontal lobes activated to use their brain and get them downloading information and when the brute encounters them they are referencing what they learn and they can go,” Feierabend said. “Our students will seem quicker because their brain will work quicker. That was the whole concept behind starting this up. We wanted to offer MMA in a format that was clean, fun and productive for the students in the area.

“MMA has gotten a bad reputation in this area and there is no reason for that. In other cities that doesn’t happen. We wanted to bring back a nice, clean image and pay respect to the thousands of people who have put their lives into the arts and brought them to their current state.”

Black Arrow is open to ages 3 and older starting with Tiny Tigers, which is ages 3-7, and moving up through the ranks. Each age group has designated times, including the popular women’s kickboxing which has numerous time slots.

Feierabend, a Camarillo Black Belt who earned his distinction in 2006 and was inducted into a select team called Guerrilla Jiujitsu, placing him at the highest levels of jiujitsu instruction, will be the head instructor at Black Arrow with help from Jessica McShane with kids instruction, Lisa Fiebiger in women’s kickboxing and Larson in MMA training.

“We hope to overcome the bad reputation that MMA has gotten in this area, not necessarily by what we do, but by what we don’t do,” Feierabend said. “We’re big on using our ears, not our mouths until we fully understand the situation. We do not allow outbursts in the training room. There is no fighting or bullying tolerated at Black Arrow.

“Our students, our entire program, is about defending ourselves and protecting ourselves. We have a pollution-free environment here. We push for good moral attitude and develop a will to strive. There is no point where we stop and say we have arrived. The arts are always evolving and we want to stay on the cutting edge of that.

“We are light and fun, but we work hard.”